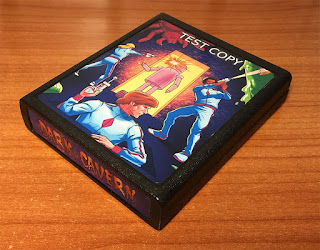 In the early days of Atari the upper management wanted to show that the Atari 2600 was a COLOR Video Game System. This seems to have been picked up by other developers as well.

The solution? Change the backgrounds to black. The black background gives the game more of an 80's arcade look and makes the graphics stand out better.

Play the game the way it should have been. DARK CAVERN BLACK!!
Even space games had a non-black background.

The same game as the original M-Network release for the Atari 2600. The only change is the background color and some new original label artwork.

Now you can play Dark Cavern with a black background on your Atari 2600.