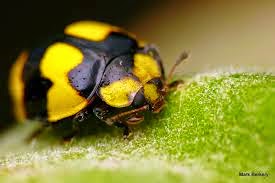 Malaysian Death Beetles can be yellow, brown or orange and have stripes or blotches instead of dots. The Death Beetle is often mistaken for harmless Lady Bird Beetles (Lady Bug) but the Death Beetle is more oval then round and the stripes are a good indicator of a Death Beetle. They can be found in tropical and sub-tropical climates.

This tiny little killer from Malaysia is a tiger in the insect World. Measuring less than a centimeter in length, the Malaysian Death Beetle incapacitates its victim then injects them with a venom that liquefies their insides. Once the bug has sucked out all those delicious innards, he discards the carcass exoskeleton by dropping it to the ground. The carcass pile can be several inches deep on the ground whenever a Death Beetle is living in the area. 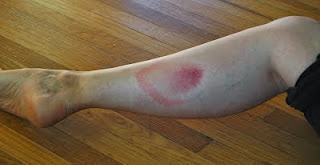 When bitten or stung by a Death Beetle, a person will feel a sharp pain at the site, followed by redness and swelling of the area affected. It causes swelling in the face, breathing difficulty, nausea, abdominal pain, an itchy body rash, and loss of blood pressure and circulation (shock). This is a life-threatening situation and requires immediate emergency medical attention. Without medical attention the mortality rate is over 20%.


This is for my daughter Britteny who hoped this was a lady bug that landed on her. Yes Britt, it was a lady bug. It was completely harmless but it probably taste bad so I wouldn't eat one. The Malaysian Death Beetle does not exist.