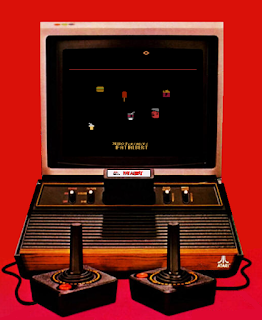 Fat Albert is a hack of the Atari 2600 game Fast Food that was done way back in 2000. I set out to brush it up a little and fix a few things that I never liked.

It bothered me that Fat Albert's head was left as several shades of purple and knowing that it is an easy fix I went ahead and corrected it it. As most people know a typical Atari sprite can only be one color per horizontal line. That left a problem with the original head sprite since his hair goes down the back of his head. In order to have his face and hair different colors they can't be on the same horizontal line. With a little optical trick it looks like we have two colors on one line, but as you can see in the detail below it is still only one color per line. I added an ear to fill up the big blank space.

I always have to start tweaking other things once I start on something. The next thing I did was change the title graphic at the bottom of the screen. I added Jello Presents to do a tie-in with Jello Pudding Pops. A What If back in the day Fat Albert was really made for the Atari 2600 instead of Fast Food and it was sponsored by Jello.

The original game you had to avoid a Purple Pickle, I guess it was spoiled. With Fat Albert it seemed better to have something else. How about a dog?  The dog was quickly added but something was missing, it was not animated. Now it is. Don't get chomped!!!

In the original game you lose a life/chance every time Fat Albert eats a Purple Pickle. You get 6 lives before the game is over. Each time Fat Albert eats one it is displayed under the score so you can keep track. I added a line of 6 hearts that are replaced one by one with a dog as you lose lives. Not really needed but I thought it was cool. Also changed the color from purple to red.

The next thing was to try to improve the items that Fat Albert eats. Here are the original items and my changes.

The Intermission screens were already pretty much perfect and basically unchanged. I did do a few tweaks here and there but nothing of note.

There is a possibility that voice may be added for the intermission screen and the Game Over screen. It would be "Hey Hey Hey" and "Game Over" in Fat Albert's voice.

To go with the Jello Pudding Pops theme I made up a fake comic book advertisement for the game from 1985. Where for 5 UPC codes from Jello brand Pudding Pops and $19 you could order a cartridge of Fat Albert for your Atari 2600. I will post an update with any changes in the future. Remember, Buy Jello Brand Pudding Pops!! 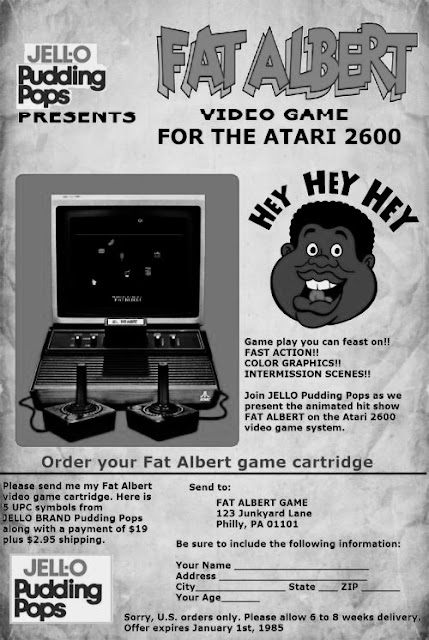 Posted by Neotokeo at 2:09 PM No comments: