Atari 2600 game based on the movie from 1988, Dee Sniders Strangeland. The movie stars the lead singer (Dee Snider) from Twisted Sister as the psychotic Captain Howdy.

A schizophrenic sadist by the name of Captain Howdy lures teens through the internet into his painful traps. After Captain Howdy captures his daughter, A detective starts pursuing him and eventually catches up with him. Instead of prison Captain Howdy is sent to a mental hospital, the Meistrich Psychiatric Institute.

You must help Captain Howdy battle his personal demons.

Strangeland was made to be signed by Dee Snider at Spooky Empire October 2013 in Orlando Florida. Two prototype cartridges were made and signed.

In early 2014 there will be a LIMITED EDITION release of Strangeland. It will be 20-30 complete with box and an unknown number of cartridge only. The release will be announced here on this page as well as AtariAge.com.

GAMEPLAY: Use Captain Howdy's fist to eliminate his personal demons! If his outstretched hand touches a demon points are awarded. Greater awards are given if the demon is eliminated while the arm matches its color.


Demons that touch your arm will do one point of damage to your health. If all six hearts are gone so are you! Only one arm can appear on-screen at a time. Fully retract your arm to enable the opposite appendage. You can change your off-screen arms color by pressing the FIRE button.  Occasionally a star will appear that randomly changes your current arms color and awards bonus points.  At certain intervals the demons will begin to move faster.

Strangeland is a true arcade Atari 2600 game that will bring you back to the days when the HIGH SCORE was King.


The Limited Edition box will be glossy red with a picture of Captain Howdy on the front with the Strangeland title.


The back of the box will contain information about the story with screenshots of the game. The boxes will also be numbered with the number of that specific box along with the total number of games made. For example: 03/20 This would be box number three of a total made of twenty.

Posted by Neotokeo at 1:47 PM No comments:


Many of you have heard of the Riddle House located in the Yesteryear Village in West Palm Beach, Florida. Also known as The Painted Lady. The Riddle House was featured in an episode of the first season of Ghost Adventures. But few know of the second haunted location in the Village known as the Civil War Captains House. The Captains House was mentioned very briefly in the same episode of Ghost Adventures.

It was said that the two houses seemed to feed off of each other and that activity escalated when the Riddle House was moved to the Village. Workers would unlock the buildings in the morning and items in both houses would be moved or broken and tossed around the rooms. Here are two pictures of the Captains House as presented in the Ghost Adventures episode.
Originally The Captains House was set up as a Civil War Confederate Captains House. It featured Civil War items and had a large Confederate flag on the back wall. This type of house is one big room with a front door and a back door. When it was featured on Ghost Adventures it was set up as a Veterans House showcasing World War I and II items.

So why the change? The Civil War House was run by an elderly man named Rose. He would tell people that would listen that the house was haunted. I have talked to someone that worked at another house that knew Rose well and they told me of an experience that they had one night in the house in the company of Rose.

It seems that Rose kept a bottle of whiskey hidden in the house and each night toasted the brave soldiers of the Confederacy before locking up for the night. Rose poured two shots of whiskey handed one to the guest and said, "Watch This".  He toasted the soldiers and pointed to the flag on the wall. The flag began to ripple as if being blown in the wind, But all the windows and both doors were closed.

O.K., So what happened to the original Captains House? Rose was not seeing eye to eye with the management in the Village and one day could not take it anymore. After an argument he walked out of the Village for good and his last words were, "When I die I am going to haunt this place!". Unfortunately for Rose that would be less then thirty days after he walked out.

The house was soon set up as it was shown on the Ghost Adventures episode. It was now the Veterans House. It didn't take long for the problems to begin and this is what was referred to on the Riddle House episode. When the house was unlocked in the morning the American Flag would be knocked down or turned over. Items would be broken and guns would be taking down and lined up on the floor. Eventually no one wanted to deal with it and the house was shut down.

Why is it called the Hidden House? The house has been moved to the other side of the property in a location that is out of the flow of guest and as far away as possible from the Riddle House. The house has had all signs and posters removed and has been repainted. The identifying plate that named the house and gave basic information has been removed. And last the house is locked and not open to the public.

Was the house abandoned and locked due to a haunting? Is it the same haunt that Rose mentioned? Or has Rose returned to make good on his threat?


If you visit the Yesteryear Village to see the Riddle House don't forget to check out the Captains House. The house is located just East of the main Village entrance. You will have to walk around other buildings to reach it.

The Captains House has now been reopened as a museum to the once thriving Pineapple Industry in Florida. And strange things have already happened.

A young man came in and started talking to the guy in the chair at the back of the room, Except the chair was empty. Also a man has been seen walking inside the building after it has been locked up. Could this be the previous caretaker Rose? Or is it one of the Confederate Soldiers shot and killed while hiding in this building?


There are several spots along the floor at the back of the room. It is claimed that these are blood stains from the Confederate Soldiers that were killed in this building? Are they really blood stains?

This building was used as workers quarters when it was originally built. Supposedly the younger children of the workers would be locked in this building during the day. There were several deaths of children but the causes are unknown.

The volunteers who run the Pineapple Museum are more then happy to discuss the haunting going on in the Captains House (Unlike the neighboring Riddle House), And like me you will also get to learn about a Florida Industry that I never knew existed. Commercial growing of Pineapples. Be sure to visit the Captains House when you go to Yesteryear Village. It is still tucked away in the corner. Take a chance and sit in the chair and see if anything happens. 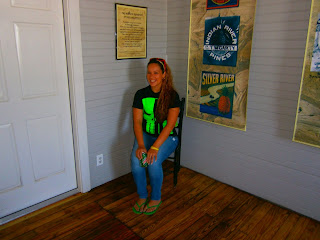 Posted by Neotokeo at 4:41 PM No comments: