ROBERT: The Haunted Doll
Robert's story begins with Mr. And Mrs. Thomas Otto in the year 1896. One particular servant who was assigned to take care of their son, Robert Eugene Gene, ( called Gene by the family)had a reputation for dabbling in voodoo. She decided she had enough of the Otto's cruelty and decided she would do something about it. She constructed a doll for Gene that was about 3'tall and stuffed with straw. People were amazed at it's very life-like features and the fact that the doll became the immediate constant companion of Gene. He named the doll "Robert". 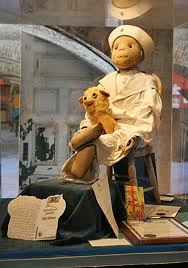 Servants and family members as well as visitors to the house said that they often heard Gene upstairs talking to the doll. What scared them was when they would hear the boy answering himself back in an entirely different voice than his own.

Strange things began to happen in the Otto household. Neighbors claimed to see Robert move about from window to window, when the family were out. Gene began to blame Robert for things that would occur. People claimed to hear the doll giggle, and swear they caught glimpses of him running about the house.

Gene began to have nightmares and would scream out in the night. When his parents would enter the room, they would find furniture over turned, their child in a horribly terrorized state with Robert at the foot of the bed "Robert Did It".... was all the boy could say. The doll was retired to the attic when they couldn't take any more nighttime upheavals and he remained there for many years.

When Gene inherited the house after his parents death, Robert was rediscovered in the attic and it appeared that the doll's hold on Gene was just as strong as it was years before. Gene's wife thought the doll was unsettling and put him back in the attic but Gene would have none of it. Gene decided Robert needed a whole room of his own and he put Robert in the turrent room, by a window. It wasn't long after that Gene's sanity was questioned.

It wasn't long before the people of Key West heard about Robert, and his reported evil ways. Many people walking by the home reported that the doll watched from the turrent room, and made faces at them as they passed... School children were afraid to walk past the house alone. Gene reported that he found Robert in the rocking chair by the turret room window, displeased with his accommodations...home. Finally Gene himself had enough of Robert.

But Robert had other plans. Visitors that entered the house could hear something walking back and forth in the attic, and strange giggling sounds. Guests no longer wanted to visit the Otto home.

Gene Otto died in 1972 and the house was sold to a new family. Robert was found again, this time by the 10 year old daughter of the new owners. . It was not long before Robert unleashed his displeasure on the child... The little girl claiming that the doll tortured her, and made her life a hell.. Even after more than thirty years later, she steadfastly claims that " the doll was alive and wanted to kill her."

Robert is still dressed in his white sailor's suit and is clutching his stuffed lion. He lives at the Key West Martello Museum. Employees at the museum continue to give accounts of Robert being up to his old tricks still today, and some visitors claim the expression on his face changes from time to time, and that you can see visible signs of aging in Robert's features.
Some people account for Robert by saying the old voodoo mistress cursed the doll while making it by placing an evil human soul inside which she possessed from some previous voodoo spell.

Are they ghosts, UFOs or some unexplained natural phenomenon? Perhaps you'd like to go observe one and decide for yourself. 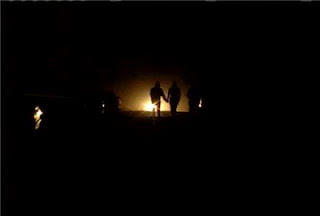 They appear in the distance with a regularity that seldom disappoints those who come to view them. Glowing in the night with an eerie, soft color, they sometimes pulse, sometimes dance about, usually near the ground or horizon. Their source is a mystery. When the curious try to approach them, they vanish, as if purposely keeping their true nature a secret.

They’re called "spooklights" or "ghost lights" and they have baffled observers for centuries. Many theories have been offered to explain their presence, including hallucinations, UFOs, automobile headlights (either direct or reflected), ball lightning, electrical discharges caused by tectonic forces, swamp gas – and even, as the name implies, ghosts.

Growing up I had personal experiences hundreds of times with spooklights. We were living in rural Indiana just outside of Muncie in the 70's. Where we lived the houses were a few miles apart and of course there were no street lights anywhere and the houses were surrounded by fields interspersed with wooded areas.

While walking or riding bikes along the roads at night my friends and I would often see single lights hovering out in the fields. They usually appeared to be only a few feet above the ground and would seem to follow you as you progressed down the road. Rarely would they approach you within a few hundred feet. The lights were almost always white but sometimes would have a yellow tint.

We often joked about the lights getting you when you were alone on the road and it certainly was very scary at times. For some reason we started calling them torpedoes. After one such encounter at night alone with a torpedo I arrived at home very shaken and ran to tell my dad about the light. Sure enough when he went outside the light was still there. He called a neighbor who came over and also saw the light. They both took shotguns and went into the field to investigate it.

The light would disappear when approached but would reappear in a different location within a hour or so. The lights were shot at with shotguns and rifles but did not affect them at all.

The local police were called several times to investigate and never found anything. In the end we were not allowed to travel between houses at night and as far as I know the torpedoes are still there. At least there were when we moved in the 80's. No one was ever hurt and nothing else came out of the lights except for freaking people out.

Anyone else ever have a run in with these lights?

Continuously appearing spooklights are found around the world. Here is a roundup of several of the most well-known spooklights. Perhaps there is one near you.
Big Thicket Light 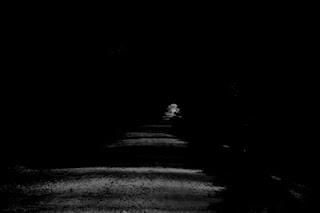 Also known as the Saratoga Light or the Bragg Road Ghost Lights, this light can be found along Black Creek near the old ghost town of Bragg in eastern Texas. Viewed on a dirt road that leads into swamp land, this spooklight carries the well-known but almost certainly fictitious legend of the railway brakeman who was accidentally beheaded by a passing train and who now searches the area for his head with a gas lantern; the spooklight is said to be that lantern. The tale is folklore that has been attributed to several spooklights. The Big Thicket Ghost Light has been described as starting as a pinpoint of light among the swamp trees that grows to the brightness of a flashlight, then dims and fades away. Its color has been likened to that of a pumpkin. 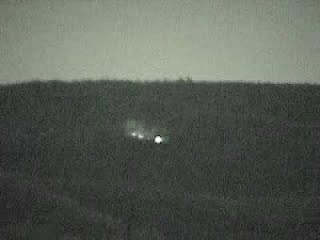 Sightings of these lights go back at least 800 years when the native Cherokees thought them to be the spirits of slain warriors. That these lights go back so far rules out any man-made illumination, such as auto headlights. The lights have since been well documented by subsequent residents of the area. There have been dozens of observations by explorers, some dating back to the 1700s, and by Civil War soldiers; several newspaper reports and magazine articles have been written about the lights. They have been described as being white, yellow or red; some say they are stationary while others testify that they move around. According to Joshua P. Warren's L.E.M.U.R. team, which has studied and photographed the lights, they often "line up into 'troop formation' and 'march' across the ridge, disappearing over the top." The peak time for viewing is in the Fall. 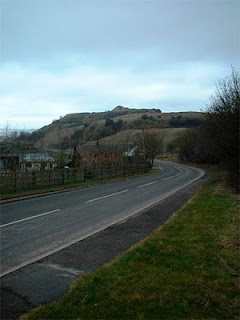 Strange lights are said to dance above the river in the scenic "Peak District" of the UK. One notable encounter took place in March, 1993 when two students watched two very bright round lights of unknown origin "dance" above the river in perfect synchronization. They watched the lights for about three minutes and estimated that they moved from between 10 to 100 feet above the surface of the river. The lights were again seen by more witnesses several months later. 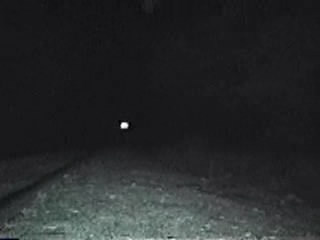 This ghost light has been seen by hundreds of witnesses who live near or travel to the area around this small Arkansas town about 75 miles south of Little Rock. Seen along a stretch of railroad tracks, this light is also explained with the "headless brakeman" legend. Because of its remote location (you have to hike about 2-1/2 miles off the road to the spot where it can be seen) auto headlights have been eliminated as a possible cause. Those who have seen it say it is usually white or blue in color, and sometimes orange. One distinguishing feature is that it has a distinctive border to it. 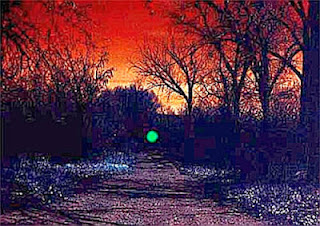 Hebron has been home to the mysterious Hebron Light for decades. One of the most remarkable incidents involving the light occurred in July, 1952 when two officers of the Maryland State Police allegedly chased a 10-inch ball of light down a dark road in their patrol car. There have been sporadic sightings of the light before and since, but many say that it has been inactive since the mid-1960s. 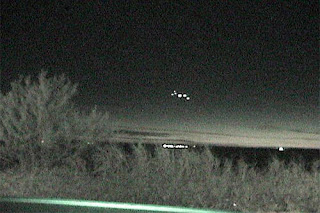 The Marfa Lights in Western Texas, nine miles east of Marfa, are arguably the most well-known spooklights in the US. Within driving distance of the McDonald Observatory, the Marfa lights have been viewed for over a century. According to a State of Texas brochure, the first recorded sighting was made by a rancher named Robert Ellison in 1883. Apache Indians thought them to be stars that had dropped down to earth. Today they can been seen at night by passersby who park in a pullover spot on Hwy. 90. They are described as changing in color and intensity, and usually move about. Most skeptics believe the Marfa Lights are nothing more than distant auto headlights on another highway, but that doesn't explain the pre-automobile sightings. The town of Marfa even hosts an annual Marfa Lights Festival every September.
Posted by Neotokeo at 5:33 PM No comments: