Dragster was the first video game developed by Activision for the Atari 2600 console, and released in 1980. Designed and programmed by David Crane. The object of the game is to either beat the player's opponent across the screen, or to race against the clock for best time. Dragster is an unauthorized adaptation of the 1977 Kee Games coin-op, Drag Race.

The world record on Dragster is currently held by video gamer Todd Rogers with a time of 5.51, yes it is possible.

Dragster: The Duel is an update of the original game. 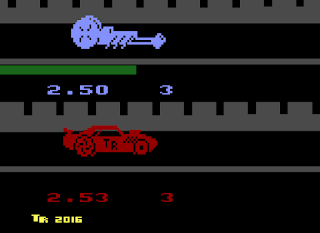 The game play is unchanged from the original game. All of your old tips and tricks will still work. Most of you will have played Dragster but for the few that have not, here is how the game works.

The tachometer (tach) shows how fast the player's engine is turning over. A dark green line that starts at the left side of his television screen for each car and turns red at about the middle is his tach. When it turns red, the player is in high power - but danger!- area. The player will find that he gets his best speed in each gear by red-lining his tach close to the maximum . But watch out! If the player revs his engine too much, it will BLOW. So be careful. Once the player blows his engine, the race is over for him . The way to build maximum speed is to quickly clutch shift and accelerate through all four gears WITH MAXIMUM POWER AT EACH GEAR LEVEL.
Once the player starts shifting gears, he can't downshift. But if the player shifts too soon, his engine will lug (work heavily); he will accelerate slowly and lose some time. It's tricky and takes practice, but the player's patience and perseverance will be rewarded with good times.

Most players first experience with Dragster goes like this, Countdown clock starts, GO!!! the player pushes the gas and BAM!!!, blows their engine. After a few tries they discover how the clutch works.  They then alternate between blowing the engine or crawling down the track. At this point the player will either give up and say that the game sucks or they persevere and learn how to get the most speed. Beating your own time is very compelling and can be the ultimate just one more try game.

The best way to play the game is with a friend. Two players racing against each other can not be beat.

Dragster: The Duel is being made for a competition cartridge to be used at various video game conventions across the U.S.A. and no plans to release it at this time. If there is enough interest in a cartridge release it is certainly possible.

Car colors and graphics can be changed.

If you want a copy of Dragster: The Duel then let me know .