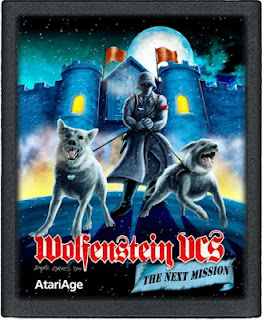 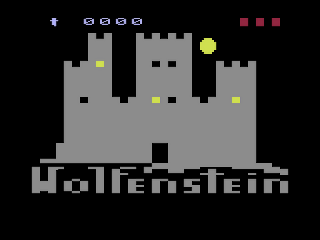 It is the height of WWII. Germany has conquered most of Europe, and Britain is suffering under constant siege by air. The dark shadow of fascism looms heavy over the free people of the world. You are Sgt. Kozwoski of the Polish special forces. Captured as part of a resistance cell opposing the German and Russian occupation of Poland, you are transported to the dreaded castle Wolfenstein just over the border in Germany for interrogation and execution, or possibly worse. Escape is your first priority, but as a member of the resistance you won't pass up this opportunity to hurt the German war machine and avenge the people of Poland!

Return to the halls of dreaded WOLFENSTEIN. All new enemies, rooms and floorplans await you in this upgraded version of the original Wolfenstein VCS. Badder, Brighter and more Deadly! Do you dare brave the depths of Wolfenstein VCS:The Next Mission? Wolfenstein VCS: The Next Mission is based on Venture, extensively modified to bring you an exciting and new gameplay experience!

Wolfenstein VCS:The Next Mission started out as a hack of Venture but the changes and reprogramming are so extensive that it has coined a new phrase for the collecting community, Hackbrew. Think of it as a new game that uses a heavily modified version of the Venture program. 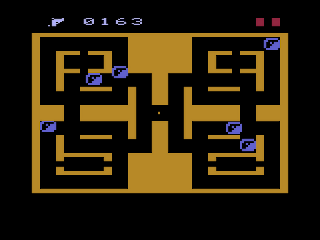 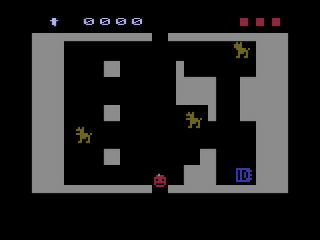 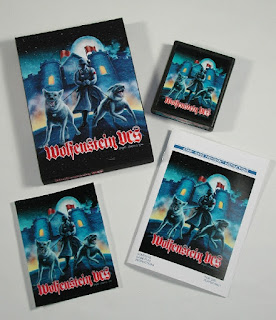 When the original Wolfenstein VCS was released in 2004 it won an award for Hack of the Year. Believe me, The sequel Next Mission blows the original away.

What started out as an inspirational idea, soon became one of the best hacks ever created. Robert M and neotokeo2001 have teamed up to reimagine the popular Wolfenstein franchise for the VCS. While it does not attempt to recreate the first person aspect of the 3-D version, Wolfenstein 2600 does do a wonderful job of catching the spirit of the game of the classic 2-D version. The hack features all new room and map designs that really make the old Venture Dungeon feel like a Nazi Stronghold! New look enemies and treasures complete the feel almost making you forget that this used to be a game about giant snakes and treasure chests. In this game, you'll encounter classic Wolfenstein foes like attack dogs and Nazi gunmen. You'll also find classic treasures such as chalices and Med Packs (which give you an extra life no less!). As if that was not enough the game also includes an amazing title screen!

This is graphic hacking at its finest and most complete. But the hack is not limited to a simple glamor make-over. The game play of Venture has also undergone a dramatic overhaul as well. Not only do the floors look different, there are now more of them. How many? Telling you would give away the biggest surprise of all, unlike the original Venture, Wolfenstein 2600 actually ENDS! That's right, you CAN escape from Castle Wolfenstein! However, I will tell you, there is a hidden bonus level for those who are very careful. But just because you can get out, doesn't mean it will be easy!

An improved weapon system makes sure you work your way out of the castle. You'll start with a short range knife and upgrade to a gun later, but don't go on a shooting spree, your ammo is limited. Luckily refills are provided. The enemies are smart, and quick and the building layout is against you. One of the most interesting changes is the way the old "hall monsters" from "Venture" have been changed into Nazi guards who actually patrol the hallway! No more mindless meandering about, these troops actually make a routine circuit around a given area, hoping to trap you! Getting from room to room is an adventure all in itself!

There is so much new and different about Wolfenstein 2600 that it almost seems unfair to call it a hack of Venture. Its more like a new game using the old Venture Engine. And that is why it is a part of my personal collection and the Stan Awards Hack of the Year!