My name is Ash. Close as I can figure it the year is 1300 AD. It wasn't always like this... I had a real life, once.
I had a wonderful girlfriend, Linda. Together we drove to a small cabin in the mountains.  It seems an archaeologist had come to this remote place to translate and study his latest find: Necronomicon ex Mortis, the Book of the Dead. Bound in human flesh and inked in blood, this ancient Sumarrian text contained bizarre burial rites, funerary incantations and demon resurrection passages.  It was never meant for the world of the living.  The book awoke something dark in the woods.  It took Linda, and then it came, for me.  It got into my hand and it went bad, so I lopped it off at the wrist.  But that didn't stop it.  It came back. Big time. 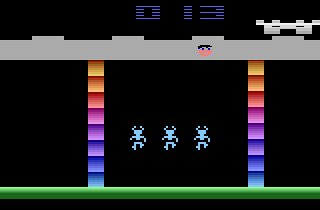 They're coming!  The Deadites approach!

There's so damn many of them.  Maybe... just maybe my boys can stop them from gettin' the book.  Yeah, maybe I'm a Chinese jet pilot. 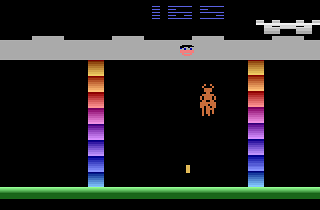 Army of Darkness is a new Atari 2600 game based on the Army of Darkness (Evil Dead 3) movie starring Bruce Campbell. You are Ash (Bruce Campbell) sent back in time to protect the Necronomicon and keep it from falling into the hands of the Deadite Army. In a Castle under siege by Deadites you are the last line of defense. The castle gates have fallen and you must keep the Deadites from crossing the drawbridge and entering the keep. Let one Deadites get by and it's Game Over, For Everyone!

Army of Darkness is a shooting game. Blast away at the Deadites as they cross the drawbridge. The Deadites will attack in different formations and speeds. Levels are broken up by Bosses who take multiple hits so watch out for Evil Ash and a Giant Skeleton.

Game features DIGITIZED VOICE! At the beginning of each game Bruce Campbell says,
" Hail to the King Baby ".

Army of Darkness was made to be signed by Bruce Campbell, Ted Raimi and Timothy Quill at the Spooky Empire Event May 27-29, 2011 in Orlando, Florida USA. The label was designed with black space to allow the autographs to be clear. This is an original game designed for the Atari 2600 and will play just like one of the original games for the system.