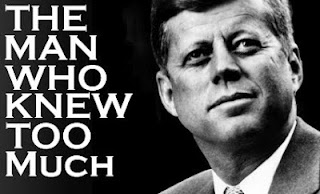 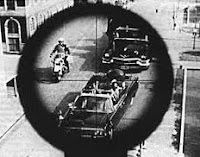 "Citizens of this Earth, we are not alone." With those dramatic words, President John F. Kennedy intended to inform the American public and the world at large that the U.S. government had made contact with aliens from deep space.

But before he could deliver the speech on November 22, 1963, the beloved leader was cut down by an assassin's bullets.

That is the astonishing claim of JFK researcher Professor Lawrence Merrick. "We now know the real reason why President Kennedy was assassinated," declared Prof. Merrick of Cambridge, Mass.

"It appears that some individuals within our government were determined to maintain the secrecy surrounding captured UFOs -- and decided to silence the President before he could speak." Prof. Merrick says he began a search for the undelivered speech after learning the President's original handwritten notes had fallen into the hands of Texas Governor John Connally -- who was riding in JFK's death car that fateful day in Dallas.

"I was surprised to find that Kennedy handed Connally the speech, which was on note cards, to look at, shortly before the motorcade set off at 12:55 p.m.," said Prof. Merrick.

The governor was badly wounded in the gun attack.

"Connally was terrified for his own life," said the historian.

"He placed the bloodstained index cards in a safety deposit box with orders to a trusted aide that the contents not be revealed until after his death."

When Gov. Connally died in 1993, the aide removed the cards and held on to them.

Last year, Prof. Merrick tracked down the aide, who passed the speech on with a guarantee of anonymity.

Prof. Merrick was flabbergasted when he read the cards. He took them to five handwriting analysts, who agreed the speech was "95 percent certain" to be Kennedy's.

Research reveals that just days before his trip to Dallas, JFK met with his predecessor President Dwight D. Eisenhower, notes Prof. Merrick. "I believe he was seeking advice on whether to go public with the facts about UFOs," Prof. Merrick said. "But other government insiders apparently felt the truth about UFOs would cause widespread panic. And they were willing to kill to keep the information secret. - ufoevidence.org / alien-earth.org 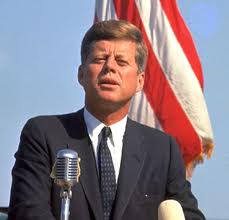 Here is what the President would have said:

Citizens of this Earth, we are not alone. God, in His infinite wisdom, has seen fit to populate His universe with other beings -- intelligent creatures such as ourselves. How can I state this with such authority? In the year 1947 our military forces recovered from the dry New Mexico desert the remains of an aircraft of unknown origin. Science soon determined that this vehicle came from the far reaches of outer space. Since that time our government has made contact with the creators of that spacecraft.

Though this news may sound fantastic -- and indeed, terrifying -- I ask that you not greet it with undue fear or pessimism. I assure you, as your President, that these beings mean us no harm.

Rather, they promise to help our nation overcome the common enemies of all mankind -- tyranny, poverty, disease, war. We have determined that they are not foes, but friends. Together with them we can create a better world. I cannot tell you that there will be no stumbling or missteps on the road ahead.

But I believe that we have found the true destiny of the people of this great land: To lead the world into a glorious future. In the coming days, weeks and months, you will learn more about these visitors, why they are here and why our leaders have kept their presence a secret from you for so long.

I ask you to look to the future not with timidity but with courage. Because we can achieve in our time the ancient vision of peace on Earth and prosperity for all humankind.

God bless you. God bless us indeed...
Posted by Neotokeo at 8:34 PM